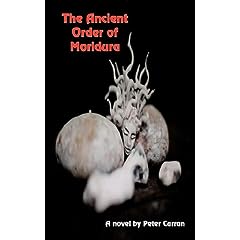 Peter Curran is the author of "THE ANCIENT ORDER OF MORIDURA", a scientific thriller with a Scots hero and an American heroine. He was born in Dennistoun, Glasgow: he now lives in a village near Edinburgh. A former human resources director in the brewing industry, he set up his own consultancy business in 1988, specialising in negotiating skills and management development, and working extensively with the Scotch whisky industry, Royal Mail and in pharmaceuticals.

He has been a keen dance band musician for most of his life, playing saxophones and clarinet, and very recently, a little banjo and guitar. His twin musical idols are Louis Armstrong and Charlie Parker. He regards himself as a totally authentic Glaswegian, having been born and brought up in the East End, near the heart of the old city, and more importantly, he says, "--- near Tennent's Wellpark Brewery!"

The following extracts from his book confirm that the hero, Alistair Mackinnon is indeed a Dennistoun man -

"I have a thing about structures built on rocks," he said. "My own house on Loch Lomond - West Craig - is on a wee rock, and my original neighbourhood in Glasgow, Dennistoun - has a street called Wester Craigs, and there was the Fir Park, a rocky hill above a stream, the Molendinar, where the monk Mungo was instructed by his dying master, Fergus, to build a church. That's where the city was founded and it's now the site of the cathedral and the Necropolis - the City of the Dead. When we were boys, after going to see the Frankenstein movie, we would climb over the wall into the Necropolis and play at Frankenstein among the mausoleums. I was the Monster, because I was tall. There's a great Spanish movie where a wee girl thinks she's met the Monster after seeing the film - what's it called, Santiago?"
"El EspÃ­ritu de la Colmena' The Spirit of the Beehive," said Santiago. "It is a favourite of mine - the little girl was wonderful."

Science fiction was one of the arcane byways in Alistair's love of books, which included the printed word in forms ranging from the Incunabula to a ticket from the last tramcar to run in Glasgow. He had a very special love for the classic period of pulp scientifiction - the original name for the genre - as he insisted in calling it. His final flourish had been to indicate that he would produce Doctor Blade at the party, having concealed the good doctor in lodgings in the town.

Paul roared with laughter at Alistair's discomfiture. The big Scot contented himself with a muttered aside. "It's not the Metro in London, it's the Underground."
"Yes," added Paul, straight faced now, "and in Glasgow, it's the Subway."
Angeline clapped her hands and cried "Why, that sounds American - do you really call it that, Alistair - the Subway?"
Paul, bent on revenge now, ploughed on regardless of his big friend's chagrin. "Yes, but it's a tiny little thing, a toy - a wee Victorian hole in the ground. They used to haul the cars along on a wire!"
Alistair straightened in his chair and went into a series of Glaswegian body movements; a certain flexing of the shoulders, tilt of the head and neutral focus of the eyes which Paul instantly decoded as trouble - whisky trouble.
The Sauchiehall Street Syndrome, as he often referred to it. Falling backwards expertly from his chair onto the floor, he screamed in mock alarm, in an execrable Scottish accent.
"I'm too wee to fight - and you're too auld, Big Yin!"
Alistair was suddenly all dignity, mine host personified. Turning to Le Patron's wife, he said gravely "My dear lady, I apologise for this Sassenach - he's just a wee bit drunk!"

"MÃ©rida is over sixty kilometres south of Caceres, Paul, and Badajoz is about fifty kilometres west of it. Caceres and Badajoz give their names to the two provinces of Extremadura. It will take us over four hours to get there."
Alistair butted in again, as was his way. "Extremadura is one of the largest regions in Europe; it's about as big as Belgium and a bit smaller than Scotland. It is one of the seventeen autonomous provinces of Spain."
"Scotland's a region now, is it, Alistair?" said Paul mischievously, winking at Santiago in the mirror.
"Watch it, Jimmy - just you watch it!" growled Alistair.
"And where is Moridanza in relation to MÃ©rida?" asked Paul.
"East of the sun and west of the moon!" said Alistair.
"Is that a quote from the Old Testament or a line from a song? You're not going to tell me, then?" said Paul.
"We head in the general direction of the Sierra del Torozo, Santiago - I'll direct you from there, if my memory serves me well enough. It's been five years or thereabouts. Moridanza's a great wee place - you'll like Manuel and Fidelicia - they're a nice couple," Alistair reminisced happily.
"And are the Magus of Moridura and Mrs. Moridura a nice couple too?" interrupted Paul.

Alistair looked at the ceiling. It had an old-fashioned centre light consisting of a single bulb suspended in a glass bowl shade that hung by chains from the ceiling rose. It reminded him of his childhood in the 1940s - such light fittings had been commonplace in the tenement flats. The bowl filled up with dead flies, dimming the light, and had to be emptied regularly, a gruesome task.
He reflected on the fact that, when he was a boy, there were very few seventy-year old men about. They retired from hard manual labour at sixty-five years of age, if they lived that long, and died shortly afterwards from emphysema, asbestosis or tuberculosis. A few lived long enough to die of cancers. The women lived a bit longer. He had expected the same fate for himself - it was the way of things, yet here he was, hale and hearty at seventy, rich, but still working. Now the fate of the young people around him was in his hands.

"My mother and father were - and are - keen dancers," replied Santiago. "When I was a child, they competed in local dance halls, and took me along. When I was seven, they sent me to dance lessons - it got me beaten up at school, but it toughened me up. I told my parents that I would only continue with the dance lessons if they also sent me to martial arts training."
"I remember once being thrown out of the old Glasgow Barrowland Ballroom for trying to throw a punch," reminisced Alistair fondly. " The bouncers arrived so fast that the punch never landed. They threw me into the Gallowgate with the traditional farewell - don't come *** * back, Jimmy!"
He then realised that he had sworn, and looked at the Moridurans apologetically. They were both sitting with their fingers to their lips in gestures of reproof, then Brother Joaqui­n burst out laughing, followed by Mateo and Manuel. To cover his embarrassment, Alistair went off at a tangent, declaring, to the evident disbelief of his audience, that shellac - a component of the old 78 records - was made from the secretions of "a wee beastie" called the lac and that the insect had featured in ancient Hindu legends.

Lonnen met his eyes with a rueful grin. "You sure get right to it when you're in the mood, Alistair - is that a Scottish trait?"
"It's certainly a Glasgow trait," replied Alistair, unfazed by the implied rebuke.

A building within the panelling of the guest wing, the enclosed space and the eerie light reminded Alistair of the fossil grove on the west side of Glasgow, the uncovered fossilised tree and root formations from a primeval forest, sitting incongruously in a pleasant city park. As a boy, it had been one of his magical things and places, together with the jawbones of the whale in the People's Palace, and the giant statue of Osiris in the Art Galleries. He felt a great surge of gratitude that he was now experiencing more magical moments at threescore and ten.

This cannot be happening, Alistair thought, reaching frantically back into his Glasgow street wisdom for a rejoinder that would relieve the intolerable intellectual conflict he now felt. He went into automatic pilot mode, and heard himself speaking as though he were an observer.
"Are there any more like you at home, Jimmy?" he said. "If there are, God help your Mammy!"

"Come with me to the consoles and I will explain what we must do," she said, looking at the two white-faced creatures standing on the floor of the chamber, then, in the voice of Alistair's mother, "That lassie's lookin' awfy peely-wally, Alistair!"
Alistair laughed, a great feeling of relief and affection swept over him, and he took Angeline's hand. "Peely-wally means you're looking pale and unwell - it comes from the time when Glasgow imported Walloon chinaware from the Netherlands, which they called wally in the vernacular. Literally translated, it is peeling Walloon, that is to say, the glaze on your dinner service is flaking off."